If you were to poll a large group of people as to what their favorite fall flavor is you would likely receive one of two answers…pumpkin or apple. Apples not only have a sense of warmth and comfort that equates to fall but they are also in abundance this time of year. Personally, I love both flavors and if polled I would not be able to choose a favorite. Although I could never choose one over the other I will admit that I have been indulging my love of pumpkin more as of late. Almost every day I have been enjoying a pumpkin spice latte with breakfast so when I saw apples on sale at the market it was time to take a pumpkin break. Typically when I think of apples I lean towards my go-to pie and cobbler recipes but this time I sought something different. Being as busy as I am, muffins are a quick and simple way to snack on the go. Keeping that in mind I decided to develop a skinnier version of a typical apple muffin. Just as I had imagined, these muffins are to die for. Biting into one is like eating a coffee cake hinted with nutty almond and laced with surprise chunks of sweet apple. Although I have named these muffins they are technically cupcakes. The process in which the batter is prepared is the creaming method used for cakes (butter/sugar creamed, eggs/extracts added, followed by the dry and wet ingredients being added alternately, beginning and finishing with the dry ingredients) versus the traditional muffin method. Even though by definition these are cupcakes, the texture is somewhere between a cake and a muffin. They are not quite as light and airy as a cake but they are certainly no where near as dense as a muffin. Outside of texture they assimilate more with muffins than cupcakes. I ultimately deemed them muffins because they are riddled with fruit, have a streusel topping, and lack a thick coating of sweet frosting (outside of the thin drizzle of glaze) like that of muffins.

After preparing these muffins I think the only thing I would change about them is the yield size. I would certainly double the recipe next time so that I have 24 instead of only 12 because they disappeared way to fast for all the labor involved. The actual preparation of the batter, streusel, and glaze is not all that laborious but the tall stack of dirty bowls and utensils the recipe leaves behind sure is. Despite the fact that these muffins are designed to be a skinnier option compared to other muffin recipes, you will likely be tempted to eat more than one, which kind of defeats the purpose. If you want to shave a few more calories you could certainly leave off the glaze and the muffins would still taste fine. I don’t recommend it since there is very little glaze that is actually drizzled on each muffin serving to make that much of a reduction but the difference in taste is noticeable. Just a tiny bit of glaze manages to round out all the flavors perfectly.

Like many of my recent posts, these muffins can be enjoyed as a dessert or at breakfast with coffee or tea. This recipe will produce 12 servings with one muffin being equal to one serving. If you are following Weight Watchers, one muffin is 6 Points or 7 Points Plus. 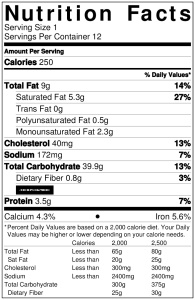 Weight Watchers: 6 Points or 7 Points Plus